George's Cycles voted one of the best 100 bicycle retailers in the United States! - 2005, 2006, 2007, 2008,2009,2010,2012,2013 and 2014! Results are in and George's continues to make the cut as one of the best. Boise represents one of the smallest population bases in the survey but packs a great impression on the professionals in the industry by including George's Cycles on this prestigious list.

Best of Boise Winner! - Winner of the Best Bike Shop in Boise by readers of the Idaho Statesman. That continues our clean sweep - winner every year since the start of the competition! Thank you Boise! 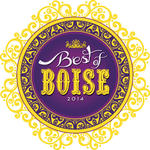